5 plus beaches within an hour’s drive from Athens 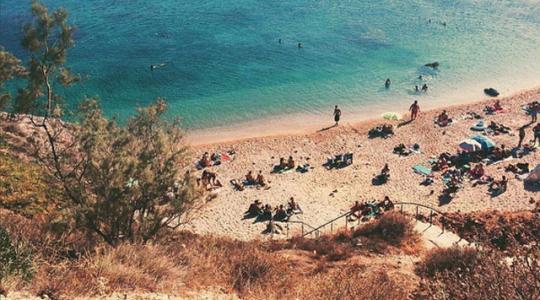 There is one surefire way of beating the heat wave in Athens, go to one of the nearby beaches and have a swim. It’s what we, locals ,do, we just drive out of the metropolis and head mainly south and/or east. There’s one thing though. When most locals say beach they usually refer to a remote seashore as such and this is how we comprised this list. The city might not be known for particularly clean beaches, but within an hour’s drive you can get yourself to crystal clear waters and sandy shores, pretty much as if you were in an island. Because, beating the heat wave, it is psychological as much as it is physical. And if you find this more adventurous than it really is, don’t worry Google Maps has you covered.

Also called Aghia Marina, this beach is situated 34 km from the center to the south. It’s a tiny cove next to a chapel, quite remote but for the weekends, when it can get a bit crowded. It’s a trade off for being situated comparatively close.

The name comes from the hotel nearby. This beach can get a tiny bit crowded because it’s ideal for watersports. Besides the hotel, you can get a few places to get a drink, and if you are really hungry you can drive to Saronis or Anavissos to grab a bite there.

This is the ideal beach for everyone who prefers remote places. In fact it’s quite far from Athens (about 60km) but close to Lavrio another small city. Nevertheless the waters are crystal clear, there is plenty of space for everyone and it has a taverna across the street. If you want shops and other luxuries you will have to go a bit further to Lavrio or Harakas.

The one mentioned above, not as big as Legrena but less remote thanks to a nearby village. It looks pretty much like an island.

This one is south and east near Keratea, about 50 km from the city center. It is really remote but there are plenty of trees in case you forgot your sun umbrella, a canteen for coffee and a taverna for food.